The story of Big Lake Goldens

I had always bred the American Goldens. They have a beautiful blonde feathery coat and, with the correct breeding processes, could potentially become exceptional show dogs. A big drawback though, is that they SHED… EVERYWHERE!

In early 2017, I learned of a different strain of Golden Retriever known as an American Field Golden. Field Goldens are smaller, leaner, darker, have a shorter coat (fewer feathers), a less full tail, and are much more athletic than their counterparts. They have a reputation of not being as sociable as Show Goldens, but are generally brighter. They are working dogs and excellent hunters.

At first sight, I was immediately attracted to the darker coats and the athletic ability of the Field Golden.  Another fantastic attribute of the Field Golden is that they shed significantly less than the Show Goldens. I have been enamored with them ever since.

I had an idea of combining Field Goldens with Show Goldens. My vision was to incorporate the best traits from both strains; a hybrid if you will, with a pedigree that is 100% Golden Retriever. I wanted all the traits from a Field Golden – athletic, fast, intelligent dogs, who were natural swimmers, with darker coats and minimal shedding; combined with the most important traits of the Show Golden –  a highly sociable family dog with an exceptional personality. Also, by breeding different lines of pedigree, I knew my pups would be healthier and have a lower probability of genetic issues as they mature.

With these traits in mind, I reached out to several breeders for advice. After speaking with, and gathering information from successful breeders in different parts of the U.S., it was abundantly clear there was a demand for the very thing I was trying to create.

In late 2017, I outlined search criteria that would help in my quest to add new members to my pack. My focus would be to find darker females with a combined Field/American Golden bloodline. My male, Jax, was a dark red Field Golden. My new direction was to produce litters of loyal, intelligent, fast, athletic Golden Retrievers with darker coats, just for you.

Putting the plan into action…

Throughout 2018, I scoured the region for Golden Retriever puppies and young adults. Every time I heard of a new litter of puppies, I was inquiring. Once I found the right litter, I researched the parents to see if they matched what I was looking for.  After investigating what seemed like dozens of litters and following leads about available younger females, I added 4 new girls in 2018. I traveled to Oklahoma, Arkansas, Louisiana, and Alabama, and spared no expense to get them. In June, 2018, I purchased a home on a few acres in Downsville, La. This gave me the ability to expand my Golden Retriever facilities to meet the expected demand for the kennel’s exceptional puppies.

In late 2020, we recognized that we’ve outgrown our home in Downsville, LA., so we began our search for a bigger home with enough acreage for the dogs to run and play. We were able to purchase a home with 7.2 acres in the nearby town of Farmerville, LA. The best part was a 20’x30′ steel building on a slab already in place at the property. We are currently renovating the building, turning it into a Welcome Center. We have built a whelping area where we will welcome new puppies into the world. We are currently building the front office area where guests can come to pick up their new puppies.

After acquiring the new property in 2020, we felt we were ready to expand. At the same time, we understood that our original Goldens (Jax, Zoey, Riley, Dixie, and Ginger) would be starting their progression into retirement. Over the years, we often received requests for traditional Goldens with blockier heads, so I knew this would be the opportune time to adjust our direction to meet the demand while still honoring the group that got us to where we are. I decided to hold back some of the females born to Jax to continue that pedigree.

We added Gunner in late 2020. Gunner is now an 85 pound male with a blocky head and dark red coat. Abby was also added in late 2020 to be paired with Gunner. Abby has the darkest coat of any of my females, and is a traditional Field Golden with a thin athletic build, carrying a weight of 63 pounds. Abby’s maternal great-grandfather is Jax’s father! Mandy is the Daughter of Jax and Zoey. She was introduced to Gunner in the spring of 2022. We will be adding 2 more females in 2023 to create a second pack (1 male + 4 females).

In 2022-2023 we will be adding a new pack on the Big Lake Goldens ranch. Fonzie (born in Arkansas, September, 2022) will be the male. Fonzie was born from parents with mahogany-red coats. His girlfriends will be Laverne (daughter of Gunner and Abby), Shirley (daughter of Jax and Zoey), Pinky (projected), and Joanie (projected) to create 1 male + 4 females.

We are hoping these additions will allow us to keep up with the increased demand for our puppies. Big Lake Golden Retrievers is now well on it’s way to provide you with the best breed of Golden Retriever you’ll find anywhere in the region. So far, my pack is healthy, happy, and loving. My heart is full. I appreciate your support. Stay tuned for puppy updates! 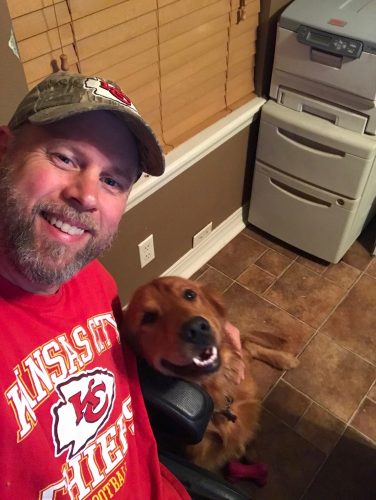